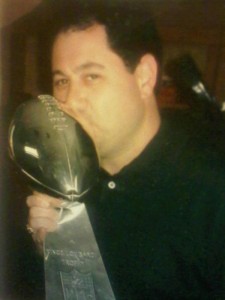 My first Super Bowl when I was with the New England Patriots was quite an experience. It was our last year in old Foxboro Stadium. We were maintaining and managing the marketing of that building, planning, marketing and selling the new building (set to be called CMGI Field at the time), and just like that, we were a Cinderella story beating Oakland and Pittsburgh and were off to New Orleans to face the St. Louis Rams in the Super Bowl. Not to mention, it was the year of 9/11 and the playoff schedule had been shortened by a week. Wow, talk about everything coming at you at once.

The marketing of a new stadium, and all that comes with it, is quite an undertaking in itself, but throw in all these other factors and we are talking “crazy go nuts”. I had been working for the team for a few years, building our plan and staff, so we were set up pretty well with our structure and concepts. But the reality was that I had never been involved with building a stadium before, and neither had ownership, so it really was new to all of us. Fortunately, we had a very creative, hardworking team that wasn’t afraid to roll up its sleeves and tackle a challenge – and I will tell you, that was our saving grace. We attacked each milestone and issue with passion and persistence.

So when the Super Bowl was dropped in our laps, we were already full tilt; I think pure adrenaline pushed us through it. The Krafts had previously gone through a Super Bowl in New Orleans vs. the Green Bay Packers, so they had a feel for what needed to be done, which was key for me and our group because the majority of us had never gone through it on the team side. It was still quite stressful, because we had to take about 1200 folks down to the Super Bowl, coordinate transportation and rooms, plan two parties, sell trips, sponsorships and TV programming as well as all the surrounding details. Oh, and we had one week to do it. Actually less, because we beat Pittsburgh on Sunday, and our guests were flying into New Orleans on Thursday. I look back and I marvel at what we accomplished in such a short time.

On Sunday, after beating Pittsburgh in the AFC Championship game, we flew back to Boston. I went home, showered, packed, kissed my kids and Patricia, and was off to the airport to fly down to New Orleans. With zero exaggeration, the group we took to New Orleans to prepare and plan worked 20-hour days with 4 hours of sleep. How we functioned, I do not know. The group who stayed back in Boston was working just as hard, and with everyone being exhausted and the pressure mounting, I am surprised no one fully snapped. There were a few confrontations and even some tears, yet we managed to hold it all together. But, I’m not going to lie, there were a few “touch and go” moments.

Everyone really rose to the occasion; it was simply amazing. On Thursday, we flew in our 1200 guests, transported them, situated them in their rooms, and threw a great Louisiana-themed party to kick off the Super Bowl Weekend. Flights, transportation, accommodations, goody-bags, parties, dinner reservations – we worked very hard to make sure our guests (primarily sponsors and premium seat members) had the experience of a lifetime. There were a few glitches, but all in all, it was exactly what we had set out to accomplish. On Friday night, I pulled my executive team aside and took them out for a great meal, just so we could stop for a moment and enjoy what we had accomplished. It was comical; everyone was so exhausted that they could barely keep their eyes open during dinner. One of the Sales Directors, Joe Mariani, literally fell asleep at the table; when his head bobbed he wacked it on the wall behind him, giving us a chuckle and a story for a lifetime (don’t worry he didn’t hurt himself, we’re not sadistic). I want to stop and thank my whole crew for how hard they worked and how much they sacrificed to accomplish all that we did. We had a very special group of dedicated people. I raise my glass to you all. Nice work.

The victory made all our hard work so sweet and worth it. I cannot imagine how awful it would have been to lose after all the work and planning – and I am talking about those of us who never stepped on the field, never mind the players and coaches. I’m very happy to say that I made it to three Super Bowls – New Orleans, Houston and Jacksonville – while employed with the team and I was very fortunate that we won all three. All were special in their own way, but nothing will compare to that experience and what transpired from old Foxboro Stadium, to New Orleans, and right through to the grand opening of Gillette Stadium. In that year, the things I learned were more beneficial than any MBA education; those experiences are enough to last a lifetime. If you wonder why I wear my first Super Bowl ring as opposed to the subsequent two – this is why.

Why Marketing Should Run Reception