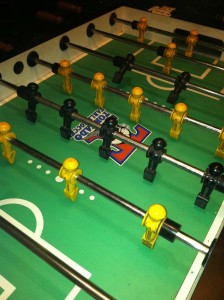 One day, I was sitting in my office at Gillette Stadium, when my assistant said I had a call from the agent of our play-by-play announcer. At that time, I was the Chief Operating Officer for the New England Revolution and controlled our radio broadcast, which entailed hiring the talent. The funny thing was that we originally hired the play-by-play guy to help him take the next step in his burgeoning play-by-play career. He and I made the win-win deal together on the phone. What was odd about this call was that he never alerted me that he had hired an agent, which to me, would have been not only courteous, but also the smart way to handle things.

I answered the phone, and was told by the agent that she was taking over management of the announcer’s career and would be the lead in negotiating all of his future deals. I congratulated her and proceeded to tell her that he probably didn’t need her for this deal, because we already had a set rate, and if she took credit for this deal, he would be losing money.

The Revolution had a limited budget; we were trying to grow the business, and our radio broadcast was a cost center rather than a revenue opportunity as in other sports. We wanted all games broadcast to help promote the sport and the team, but we were not in a position to hire big name talent to announce the games, thus the perfect opportunity for this up-and-comer.

The agent began the negotiation dance. I assumed she thought I actually wanted to haggle because I said we had a set fee, but I wasn’t negotiating – I was just stating fact. We were paying the play-by-play announcer around $300 per game, plus expenses. The agent proceeded to ask for $500 per game plus additional “stuff” to go along with expenses. I assumed she figured I would negotiate off her price and that we would come to an agreement somewhere in the middle, giving her client a raise and herself a commission. As I said, I wasn’t negotiating. I told her we could only pay $300 per game. She began listing the merits of her client, why it would be a travesty if he didn’t do the games, and how it would hurt our broadcasts. But regardless of what I said, she just continued to sing her song.

I was in radio for ten years prior to joining the Patriots and Revolution, and one thing I knew to be true is that in this day and age, listeners do not tune into games for the announcer; they are tune in to listen to the games. Don’t get me wrong, there are spectacular announcers who call the games like an art form, and make listening to the games more enjoyable. But when push comes to shove, people listen to hear the details of the game. If I had unlimited resources, I would have hired seasoned professionals to call our games, because you always want the best, but it has to make business sense. The play-by-play announcer, unlike the talk show host, can be more easily replaced.

So, I listened to the agent negotiate with herself and bring her price down a bit, but my reply was steadfast, “I can pay him $300 per game.” She wasn’t satisfied and rambled on some more, until I stopped her because I had to deal with real business. I said that she should go back to her client and tell him our final offer is $300 and we would love to have him back for the season. I also told her that when she called back, if she insisted on continuing negotiation and wasting my time, then the price would drop to $250 per game. She said she would speak to the announcer and get back to me, which she did a few hours later with a new number of $400 per game.

I do not think she saw it coming or expected my next words, which I find amazing because I told her what I would do before she hung up last time. I was true to my word and replied, “Now, I will only pay him $250 per game.” She was outraged and couldn’t fathom my reducing the fee. Again, I don’t understand why, because I was very clear when we spoke earlier. I heard frustration, anger and bewilderment on the other end of the line, which led to my next statement. I told her that the new number was $250 per game, and that if she called back again to negotiate, it would be dropped to $200. I heard a slight gasp, followed by, “I will speak to my client.”

The next morning I received a call from the agent that began all perky and happy as she declared, “OK Lou, we will just stick to your budgeted rate of $300 for this year, but we want a few tickets, etc…” If you know me even a little, then you know what’s coming: “It’s now $200 per game.” I realize some would think this to be an unreasonable reply, but I didn’t then, I don’t now, and never expect I will subscribe to that school of thought.

I think I can end the play-by-play of the story right here. Needless to say, we were unable to come to a meeting of the minds. I ended up going in a different direction, and ultimately hired another young play-by-play announcer who was looking to kick-off his career. The negotiating announcer went on to do play-by-play for another sport. A door closes and a door opens. Everyone is replaceable. The thing to remember about any negotiation is that you can’t be afraid to walk away from the deal; another will always come along.