Bumpy Is A Reminder Of Comfort And Consistency 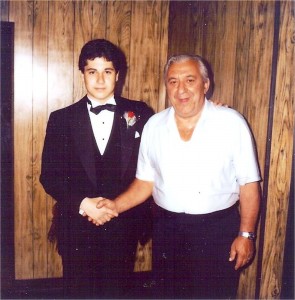 It was just my grandfather and me in his hospital room, at least that’s how I remember it. Just the two of us; he could barely speak, and the oxygen mask over his mouth and nose made the words inaudible, yet I understood what he was saying. He was saying goodbye and that he was sorry he had to leave so soon, but that everything would be ok. On his deathbed, my grandfather was still trying to instill confidence and comfort me while putting his departure off to the side. My grandfather just didn’t have the will to fight any longer. His health had been failing for years, but now his lungs and heart were just beat up too badly and they choked his fight. I knew that bothered him more than death itself. He didn’t want to quit, but far worse, he didn’t want me and the rest of the family to witness it. But we all knew it was his time and further fight was futile.

This memory came to mind while my kids were having fun playing out in the snow. I spent very little time with them the past few days, but I had been at the house the entire time. They were preoccupied with their friends and cousins and having a grand time together. They gave me a hug and kiss before they went to sleep, and even though we didn’t have long philosophical conversations or throw a football around or ski together during the weekend, I could feel they were happy that I was just there.

I could feel it, because I felt that with my grandfather. He was a constant in my life; very dependable, constantly supportive, and always there. That’s not to say he followed me around everywhere I went, he didn’t. In fact, I do not believe we ever played catch together or that he ever attended any of my games. Those things, though all fun, were not things we did together. That didn’t change the feeling of closeness I had with my grandfather, because all of his actions toward me and my other family members were for our benefit, and not his own. Sure, he did things for himself, but his life was for his family, and even when we were not together, that feeling was omnipresent.

I have been thinking of my grandfather more and more lately, due to the fact that we are entering 2013. My grandfather’s favorite number was thirteen. He always believed it was lucky. He said to me once, “The number thirteen is not unlucky; it’s just another symbol that people latch onto while looking for an excuse for why something is not working for them. I say you make your own luck, and if you believe a number is unlucky it will be, but if you believe luck follows you or that number, it will be that way as well. The number thirteen is lucky for Italians, so it’s lucky for you and me.” I’m not sure if there are lucky numbers, but I do know if you truly believe in something, it will most likely point you in the right direction. I believed in my grandfather (who I called Bumpy), and he never steered me wrong.

So, I am going into 2013 with two themes in mind. First, I am going to let it be a constant reminder for me to do everything in my power and to take every opportunity to let my kids and family feel and know that I am always there, dependable and supportive, even when I am not present. I want to make sure to do all the things necessary so they have the confidence and comfort within them that my grandfather made sure I always had. Second, I am going to let 2013 be a reminder that you make your own luck or your own excuses, and that making my own luck is the way to make sure I can take care of the first theme. Whatever your focus may be in the New Year, here’s to 2013 being a year of making your own luck and to hoping that it is all good luck. I am hopeful that Bumpy’s words will help you have a spectacular year. Much love Bump ~ I miss you every day.

Are You Downshifting? Time To Go Do