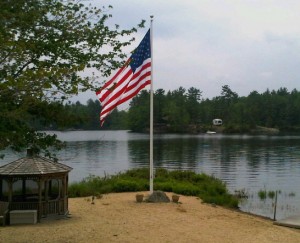 It was a wonderful Memorial Day weekend, and as we sat around enjoying each other’s company and the day, I reflected on the magnitude that many have sacrificed in order for us to enjoy the day and the freedom that comes with it. If you think about it, it’s a pretty remarkable phenomenon; total strangers putting the country, other people, and the concept of freedom before themselves. In the civilian world, this is not a common occurrence.

It’s one thing for your family and friends to sacrifice for you; they have a skin in the game. For a parent to give to her child before herself is something that is easy to comprehend. However, it is remarkable for a total stranger to fight on behalf of a firmly held conviction in a concept, perhaps for the benefit of his descendants, but other times just because he believed in doing so for the greater good. That’s just an amazing quality in a person – sacrificing everything for others.

In today’s workplace, it’s very rare for someone to stick their neck out for others. It’s also uncommon in our schools for kids to run to the aid of those being taunted, for fear of having to endure the same treatment. Why does it seem that our forefathers were so eager to risk it all for the good of the future, while today, most people are running for the exits and looking to cover their own asses? Admitting wrongdoing, taking the high road, and doing the right thing are foreign concepts, especially if it means facing consequences by taking the honorable route.

So what has led us astray? What has caused people to become total sell-outs and do anything to save their own skin? Why do folks take so much for granted with no thought as to why they have these rights and privileges?

I am not a sociologist, but it seems to me that the deterioration of the family unit has greatly affected this shift in decency. Parents are buying their kids things to compensate for the love they are not providing. They’re counting on the school systems to teach loyalty, honor, and integrity. Many parents both work to be able to make as much money as possible to provide their kids with the best of everything, but they are not providing what their children really need: themselves. I was at my daughter’s track meet the other day and noted that the lack of spectators, especially parents, was disgraceful. I’m not here to get on a soapbox and shake my finger at people and judge how they live their lives. I have enough to focus on in my own life and make sure I am doing the right things. But, I think many folks are all caught up in what is deemed to be the path to having a good life, and that many are missing the point and what is truly important.

I remember being told a great story, I’m not sure where it originated, but it’s dead on.  A father came home late from work, missing dinner again, and his little boy inquired, “Dad, why do you miss dinner with us so often?” The father replied that he was working. The little boy proceeded to ask, “Why do you work so much?” And the father said, “Son, I work so hard so I can give you everything you want.” Then, the little boy looked up at his father and said, “All I want is you.”

I think that because household members are so overburdened with their individual work and schedules, they don’t often sit down and have dinner together as a family unit. That hour or so is probably the most valuable time parents can spend with their kids. It is a great opportunity to instill values and character into children. I have a feeling that the folks more apt to sacrifice for others most likely learned great lessons while having dinner with their family on a regular basis. I’m not suggesting that this is the only way kids become more in-tune and caring for others. It just seems that it is a part of society that has faded away. As a result, it has eroded how kids value others and the benefits they have at their disposal, including the freedoms they enjoy because of the sacrifices made by people they don’t even know. Maybe that could be a topic for discussion the next time the entire family is together at the dinner table. It’s definitely something that no one should take for granted.

Giving Is About The Recipient, Not The Gift.

Being A Parent Is A Balancing Act