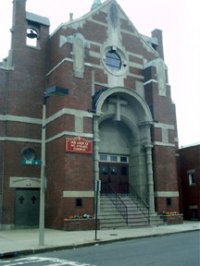 As I recall the event, it happened when I was around 11 years old, and had been an altar boy at Our Lady of Mount Carmel Church for almost 5 years. Because of my experience with serving mass, I typically got the primo assignments; The High Palm Sunday Mass at 11:30am  qualified as one of the bigger ones. This mass was epic. It lasted for a day and a half. Ok, it was more like two hours, but it felt much longer. All of the parishioners, dressed to the nines, came to get their palms prior to having their Palm Sunday dinner.

The problem with this mass is that there is a lot of standing. Typically, in a mass, you stand, sit, stand, sit, stand, kneel ~ well, you get the picture. I think when the priests developed the format for a mass, they wanted to make sure there was a lot of movement so that no one would fall asleep. Unfortunately, the same thought wasn’t put into the marathon Palm Sunday Mass.

This particular Sunday, my mother and sister were part of the congregation, along with a couple of other relatives. I remember this day well. The church was warmer than usual for a spring day; not so hot that you were sweating, just a comfortable warmth.  It was about forty-five minutes into the mass and we were going through all the steps – candles, incense, readings – all leading up to the longest gospel of the year. John Zirpolo, a younger kid in the neighborhood, was serving mass alongside me that day.  (We have since discussed what occurred that day a couple of times as adults over dinner.)

Father Norbert (who I believe was the priest who said mass that day) took the podium and began the gospel. I started to zone out to his monotone words, and the scent of the incense, coupled with the warmth of the church, formed a trinity of comfort, and a symphony of flickering eyelids soon began. Father Norbert was about two-thirds of the way through the gospel when a deafening SLAM echoed through the church. The sound reverberated throughout the pews. One of the altar boys hit the floor like a ton of bricks. SLAM.

Ok, so I have a flair for the dramatic and my timing is unrivalled. But this was no prank or played-out stunt. The length of the gospel combined with the heat and boredom lulled me to sleep while I was standing, and I toppled over, slamming onto the floor of the altar. No Joke. Out cold. I was in a bit of a daze and the mass was put on hold while I was taken into the sacristy. I didn’t see it or hear it, but my landing flat on my back in the middle of Palm Sunday Mass wasn’t as dramatic as what happened while I was out cold on the floor.

Apparently, at the sight of her son dropping on the altar, my mother ran full speed up the center aisle of the church screaming, “JESUS CHRIST, OH JESUS, MY SON ~ OH JESUS, MARY & JOSEPH.” Quite the sight anywhere ~ never mind in a church. I guess it was quite hysterical, although you can understand the only thought running through my mother’s mind was that I could be dead. I wish there were smart phones back then, because I would have loved to have seen that video. That had to be some funny stuff, and I missed it. I know it wasn’t funny to my mom, and no one in the church actually laughed, but come on, classic comedy material.

I have no lesson here. No nugget of wisdom to share. Just sometimes the funniest things happen in the oddest places. For those of you who celebrate it ~ Happy Palm Sunday, and by the way, don’t fall asleep at mass (unless it’s on video).

In the Middle of Good and Evil

I Found My Fandom (My Kids Had It)