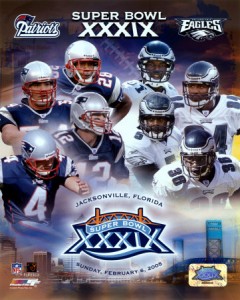 It’s Super Bowl week, so it’s only fitting that I tell a few stories about my experiences surrounding Super Sunday. I have been fortunate to experience many Super Bowls over the years, in many different ways.  Each stage of my career has provided a new perspective on the hoopla and pageantry of the NFL’s biggest game.  When I was in radio, we used to broadcast live from the host city, and even though it was work and we were creating shows around the Super Bowl, due to our media affiliation we did also manage to attend the parties and experience aspects of the Super Bowl that not everyone had the benefit to enjoy.  When I was with the New England Patriots, we were not only attending, but were also a part of all the festivities and happenings.  It was a great experience, but it was work first; personal fun was just a by-product of that experience.  I also have had the opportunity to go to the big game and not have to work, but just enjoy the festivities and the spectacle surrounding the NFL’s crown jewel.  So, a pretty lucky guy.

The funny thing is, I have been sitting here racking my brain to come up with a “this one was better than that one” story and lesson, but the fact of the matter is, they all were both great and difficult in their own ways. They all had pieces that were tedious and jubilant. So I thought I’d share a few that may be of interest from a behind-the-scene perspective.  If you didn’t get to see it, yesterday I re-posted a story from when I was in radio producing shows on “Radio Row” (click here to read). Today’s story will probably shock you in disbelief when you first read it, but I hope you will agree I did the right thing.

Jacksonville was a logistical nightmare. The AFC team hotel was just too far removed from the stadium, and the traffic was a disaster all week.   We had to hire police escorts while entertaining our clients in order to get them from one place to another without sitting in traffic for hours. It was ridiculous; that city is just not equipped to host a Super Bowl. We adapted and made it work, and our clients and guests thought it was great, but logistically, it was more than a challenge.  Because of this, about mid-week I decided that there was no way I would be able to go to the game and run a flawless post-game party back at the team hotel. Being the boss, I had the option of delegating, but I felt it wasn’t right to deprive my staff of the experience.  I had been to many Super Bowls, including two with the team, and it just made sense for me to stay back and make sure everything went smoothly.

So, I asked the hotel to set up a tailgate experience in our suite and bring up a wide-screen TV so Patricia, the kids and I could watch the game in the hotel. We enjoyed the game, and as it was ending, I was able to change into a suit and head down to the ballroom immediately following the trophy presentation to make sure everything was set for the thousands of guests coming to enjoy a great victory party and see the Black Eye Peas and Lionel Ritchie perform. The party went off without a hitch, not because I stayed behind, but because everyone worked hard to plan and execute to the highest level. I just needed to make sure that was the case, as we only had one shot of getting it right.

I’m sure I have made a few mistakes along the way as a leader, but I’m very happy with making that decision on that day. I would like to tell you that I thought, “To be a great leader, I need to do this act.”  But it truly wasn’t calculated on my part. I wasn’t playing a chess game to gain the favor of my staff or ownership. It just sort of happened, and I knew it was the right thing to do. So you may call me crazy for missing the game live, but even in super, exceptional moments, you need to display great responsibility. Leaders can’t be afraid to sacrifice themselves for the benefit of their team. It’s really part of the job description.

The Summer’s Over, You’ve Got To Buckle Down

The Longevity Of Leadership