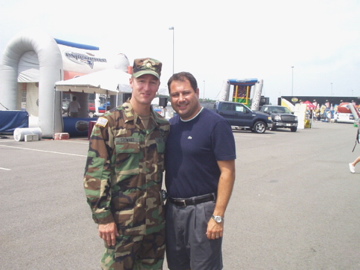 I had a real moment last week when I was not only taken aback, but overcome with emotion. Many are fighting the fight every day and looking to get through life and our own experiences and issues seem to overshadow all else happening in the world.  The reality is that most have it damn good; I for one am blessed with very good fortune, and although we appreciate it, do we appreciate it enough?  I posted a quote on Facebook from a note I received from a Lt. Colonel in Afghanistan, and Jack Walsh, a buddy of mine, commented, “Wow! I’ll bet you never thought Winning the Customer was going to be used to help win the war on terrorism. Congratulations, that is fantastic. Saving lives just sitting on the lake, nice work pal.”

Let me back track to when I first released Winning the Customer. In September, I sent out a note on LinkedIn to my colleagues that we were releasing the book, and I hoped I could count on their support. I received many nice notes and great support; in early October, I got a note from a past client and pal, Lt. Colonel Tom Stewart, who was stationed in Afghanistan. He congratulated me, and said he was going to get the book as soon as he was back home on leave. I told him not to worry and that I would ship one to Afghanistan; it was the least I could do. Just as an aside, the US Postal Service got it to him in just about a week, which I thought was amazing turnaround time.

Fast forward to last week, when I receive a note from Lt. Colonel Stewart thanking me for the book and letting me know that he will be home in a few weeks and that he was looking forward to getting together. In the middle of his note he wrote this:

“Got to let you know that when I mentor my junior officers I use quite a bit of your lessons about relationship architecture. It’s been important and essential to our success here in a war, believe it or not. We’ve focused on building and maintaining relationships with coalition forces, the Afghan National Police, and local Afghan business owners. It’s resulted in some amazing information flow that comes our way about some pretty bad dudes and how to keep us prepared and safe. So far so good man. You’ve really cracked the nut on something that’s very much overlooked in business AND war.”

I thought that was the coolest thing I had ever heard about anything I have ever done professionally. Here I am, a sports marketing guy, creating things for fans to have fun so that teams can generate revenue and brands can connect with consumers, with really nothing of true significance on the line. Getting that note was just… wow. Even though it was an amazing compliment, I never took it to the place that Jack did. I never put two and two together that anything we did could save lives. I’m just a marketing guy.

I’m overwhelmed with the concept that our book had any impact on keeping troops safe. Sure, when Elizabeth and I finished Winning the Customer, I assumed it would help people do business, but never in a million years did I believe it would be in this way or at that level. I get goose bumps every time I read Tom’s note. We take so much for granted living here in the US, but there are people laying it on the line for our freedom every day.  I can’t speak for everyone else, but I am not sure I am consciously thankful enough for their sacrifice. Tom, you shouldn’t be thanking me, I need to be thanking you and the men and women who serve this country. Thank you bud, be safe; see you in a few weeks.

There Are Many Routes To A Solution, Choose Wisely

The Right Pieces to the Puzzle

How do you separate yourself from the rest of the schmucks?