Chats with Mimi at 3am 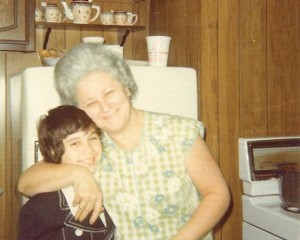 When I was twenty-two, I would come home at 3am or so after a night of clubbing, and as I opened the door to walk up the stairs of our three-decker home, the door of the first floor flat would open simultaneously. It was my grandmother. She looked half asleep and her questions were always the same, “You just getting home?” “Yes, Grandma,” I’d reply.  “Are you hungry?” she would ask. “I could eat” always came from my mouth. That would be the beginning of a 2-hour conversation that was not only incredible, but also enlightening.

I was blessed beyond imagination. My grandmother existed for her children and grandchildren. Nothing else mattered; nothing else was important, not even her own dreams or desires. What made her happy was when we were happy. My grandmother derived satisfaction by living a life serving her family. This was a woman who had a full time job working piecework at a Boston sweatshop where she sewed clothes in a factory.  She came home, cleaned the house, made dinner and tended to all her family’s needs, without nannies or housecleaners – no help at all. I’m sure there are other women who sacrificed that way, and still do to some extent today, but that is a rare and exceptional woman. My grandmother was a force of nature.

She’d make pasta late night, or should I say early morning, because she wanted to make sure we didn’t go to bed on an empty stomach. She also wanted to make sure we were ok. But what came out of those sit-downs were great bonding conversations. Sometimes they were deep, other times they were nothing but laughs, but every time, the love was real and the conversations were genuine. No pretense, no phoniness, no pleasantries. Real, down to earth discussions about life, happiness, love, hardship, work ethic, loyalty, honor, and much of the time consisted of comedy and laughs.

It wasn’t a “one and done” experience. It wasn’t an aberration. These late night chats and meals were very common from the time I was 17 until I got married and moved out at 27. It was a decade of chats with Mimi (the name I called my grandmother). At times, it was just the two of us; other times my buddies were with me. But no matter what the time or how many people, Mimi was a constant, and there was always plenty of food and more than enough care. My pals still comment to this day about the remarkable experience, and how it left an impression on them.

I know I am not doing the experience justice. I realize that it could just be considered a nice gesture from a loving grandmother. But it was so much more than that. She provided an opportunity not only to show love, but also to instill beliefs and confidence. She completely gave of herself for our benefit and happiness. And because of this, I am not only eternally grateful, but also in awe of the absolute selfless attributes of my grandmother. Those conversations did more for a young man than all of the courses he took in college and most of the books he read. The giving was at a level that rivaled anything from any other purveyor. This was unconditional love to the max.

I hope that this experience is not alien to those of you reading this. If it is, I wish I had the eloquence to describe it more thoroughly and do it justice. You will have to just believe me that it had a remarkable effect on me and how I live my life.

Mimi, I am sure I did not say it enough, and I regret that it is too late now, but as you look down from your lofty spot up on high, please know that I am very grateful for your love and giving ways. Thank you; I love you more than I can say.

Take Me Out To The Ballgame