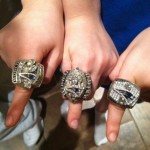 I am fortunate to have three Super Bowl rings. They are big and gaudy, so people notice them. I wear one every day, partially because it’s fun, and partially because when people see one of the Patriots Super Bowl rings, they ask questions, and want to hold it and try it on. A Super Bowl ring is a great ice breaker that gives me an advantage over others who do not have a unique item to separate them from the rest of the pack. Wearing a Super Bowl Ring is a game-changer in doing business.

Unfortunately, not everyone has the luxury of wearing such an impactful tool to help them begin a conversation in the genesis of a relationship. But, that doesn’t mean those without something like a Super Bowl Ring are at a disadvantage. In fact, there was a time, prior to being part of a championship team, when I did not own a ring and had to be a bit more creative in “breaking the ice” to start a conversation.

When I worked in radio, my job was to book guests for a sports station. Every year, we aired remote broadcasts from the Super Bowl. There were many celebrities and athletes in attendance, so the prospects for having great guests on the show were target rich. When we first started broadcasting on location at the Super Bowl, it was very easy to book guests on the show. There were 3 to 5 stations broadcasting from the lobby of the NFL headquarters; as celebs walked by, they’d stop and spend 10 to 15 minutes at each station. However, over time, more and more stations caught on to the concept and things became much more competitive. It got to the point where dozens of stations were lined up in an area called “Radio Row”; all the good talent would avoid the area, in fear of being trapped for hours, going from station to station.

If celebs were promoting an initiative, book, or product they’d be more likely to make the rounds at “Radio Row”, but the pertinent athletes and celebrities tended to avoid the area. One year, former Raider, and current Fox broadcaster, Howie Long, must have lost his way and ended up in “Radio Row”. The buzzards smelled fresh meat and began to circle. Howie walked past the stations as swiftly as possible to the sounds of desperate radio producers yelling, “Mr. Long, Mr. Long – Hey Howie – please join us on WXXX or KNNN.” Head down, Howie bee-lined for the elevators to escape being picked clean.

Fortunately, I was a veteran of the game (albeit just as much of a circling killer) and I spent a great deal of time prepping and developing “ice breakers” to catch the attention of my targets. During brief encounters, you only have so much time to snag and capture, so you have to be concise, but impactful. I swooped next to the former gridiron giant and Charlestown, MA native and jumped into the elevator with him. As soon as the doors closed, I said, “We have mutual friends.” He looked at me, obviously tired of being harassed, and said, “I doubt that could be possible.” I know that it sounds like Howie was being rude, but you have to understand, at this point he had 50 radio producers clawing at him. Very calmly and casually I said, “Well, I guess I will tell Herb Wenzel that you don’t remember him.”

It was as though everything suddenly came to a complete stop. Then this huge, rough, stern looking quarterback-sacking machine slowly looked over to me with a friendly smile on his face and exclaimed, “HERB WENZEL, how the hell is he? Herb is a great guy.” I explained how I knew Herb and what he was up to. And then, just when the moment was perfect, I made my dive. I asked him if he could join us on Sports Radio WEEI from Boston (his hometown). He was so caught up in reminiscing about the old days and great memories, that he couldn’t say no.

So, Howie Long came back downstairs, following my blocking, and joined us on the air. He was fun, entertaining and an awesome interview. As he rose to say goodbye, I shot a look at the other buzzards to protect my kill, and they backed off as a sign of respect. Howie jumped into the elevator, not to be seen again until the pregame show aired on FOX. A few of the other producers walked by to give me the nod and some high fives before taking off to land their next guest.

I didn’t have a Super Bowl ring in those days, but I created “ice breakers” through hard work and solid background research. With a little effort, anyone can pull out a nugget of information to crack the hard exterior of that initial conversation with a person who could be their next Howie Long.

The Snow Bowl Took Away My Fandom