Gillette Stadium Is Golden With Its McDonald’s Signage 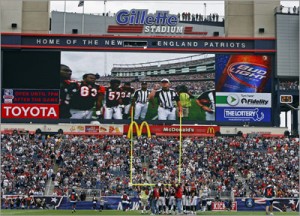 When we were building Gillette Stadium, we had many things to think about to make sure we maximized revenue opportunities.  We were constantly walking through the building, looking at every nook and cranny to make sure we were getting the most out of the building, without creating a NASCAR Stockcar out of our new facility (you know, logos all over it).  So it was always nice when we could come up with a solution to generate revenue that was built into the stadium. It’s also why the McDonald’s deal we did was one of my favorites.

When we drew up the plan for signage, we laid out the number of signs and the dollar amount we wanted to attribute to each.  If I remember correctly, at the time, I made the bold statement that we would generate $10 million dollar in pure signage revenue.  We obviously made a list of every sponsor we believed would be a signage candidate.  This roster was made up of both prior sponsors and potential new ones.  Some of the past partners who had signage in the old stadium were just not a great fit due to the much higher price tag we placed on the sign inventory.

McDonald’s was one of the companies that we had slated on our list.  As we engaged in discussions, we noticed a strong interest on behalf of McDonald’s Corporate to serve product in the stadium; the negotiations went well beyond the standard elements of a sponsorship package.  But, what was most exciting to us was that the end zone locations were perfect concession areas that could be converted into stands to serve McDonald’s products.  That also allowed us to utilize the McDonald’s storefront signage as in-stadium signage.  The trick was how to do it without blocking our current signage layout, and while staying within NFL league rules, which required all stadium sponsorship signage to be above the goal posts.

Fast forward to the NFL Kickoff and our Grand Opening.   All of the NFL officials and dignitaries were walking around the field; the NFL Game Operations folks looked up from the turf and gazed in shock at the huge Golden Arches right between the uprights.  One of the NFL executives (and a really great guy), Tim Davey, came over to me and made reference to the McDonald’s sign.  I told him that we absolutely abided by the league rules, and that it met all the signage regulations. Still, later in the week, we received a letter from the league stating that the sign was in violation of NFL policy.  We invited them to come down and bring anyone they wanted to check it out, but we had no doubt we were well within the rules.

The reason we knew this was that during discussions with McDonald’s, I contacted our building crew to find out where the exact height of the goal posts would be in relation to the concessions structure.  A bunch of the building team members and marketing folks took a little field trip to the end zone to understand those calculations so we could plan for the McDonald’s signage and be in compliance with league rules.  Our in-house construction team actually had the contractor build the façade with the signage in mind.  If you walk through the end zone concourse, you will notice that the bottom of the Golden Arches is two inches above the wall that juts out a bit, which also happens to be two inches above the top of the uprights.

When the NFL Operations crew came back to investigate, they found out what we knew to be the case – the McDonald’s sign was two inches above the goal posts and the signage was, in fact, in compliance.  If you look at those Golden Arches, you will say, “There’s no way that sign is above the uprights; they’re smack dab in the middle of them.”  You, too, would be wrong.  The fact of the matter is that it’s an optical illusion. Not only are they above the level the NFL requires, but the teamwork of multiple departments ensured that was the case and orchestrated what is, perhaps, the best use of in-stadium signage in the NFL.  All that, and we didn’t have to eat up any of the original signage inventory to get us to our goal, which we were able to surpass. Guess you could say we were Golden.