Gillette Stadium Is Covered In Snow… Hand Me A Shovel. 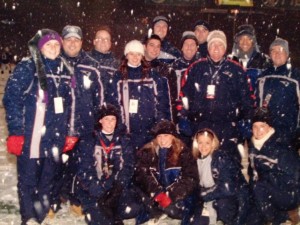 It was December 6, 2003, the day before the infamous Patriots/Dolphins Snow Game. I walked down to the person in charge of snow removal at Gillette Stadium and asked if there was complete confidence that we had the proper plan in place and that we were prepared for the forecasted snow. It was the first major storm that we were to experience in the new building, and the old way of doing things probably was not going to get it done. I was assured that we were prepared for what was to come. I am a big believer in the precept that what got you to where you are today is not enough to get you where you need to be tomorrow. Quite often, especially in stadium operations, it’s “Standard Method of Operations” and I did not want that to be the case for this game.

I know you may be asking, “Why would the Chief Marketing Officer of the New England Patriots care about the plan for snow removal at the stadium, and is he out of line for even asking?” I am sure many would look at it that way, but I viewed every aspect of the stadium as a part of marketing if it involved any of our customers. So as I saw it, this snowstorm affected all of our customers, from season ticket holders to premium seat holders, as well as all of our sub businesses, from concessions to the Pro Shop. So, in my manner of operating, asking the question was in my realm of responsibility.

I will go even further. I didn’t just go down the hall to be a pain in the ass and make sure we were prepared because I had the feeling we were not. I also came offering assistance and a potential solution. One of our clients was the National Guard, and we could have made one call and they would have mobilized the manpower in minutes in exchange for entrance to the game for the men and women after they helped remove snow. I offered up a nice, easy and very doable solution. But no, the feeling was that it wasn’t my “area” and the plan in place was “sufficient”.

Well, as we all know and witnessed, the plan wasn’t sufficient. In fact, it wasn’t even partially sufficient. I never had the confidence others had that the plan was going to be enough, my gut told me it was going to be lacking. So I asked my staff to come in at 6am, three hours earlier than normal for a 1pm game. Upon arrival, and a visual that my instincts were dead on, we grabbed shovels and began shoveling out the club seats to get them to a place where premium seat members could actually sit.

So, if you were in the group of folks who questioned if I should have stuck my nose in operations business, are you also asking if the CMO and his staff should be shoveling out club seats on game day? My answer is, “Whatever it takes.”

When it comes to great customer and client service, you must be prepared for any curve ball thrown at you, and if you are not, you can’t chalk it up to, “Too bad for the customer.” Your lack of preparation is not the customer’s fault, it’s yours and you must do whatever it takes to make things right. This is why marketing should stick its nose in other departments’ business when it pertains to any interaction with consumers.

While my crew was knee deep in snow and shoveling I heard, “Imbriano, way to go!” It was Mr. Kraft giving me the thumbs up. When you own a team or a company, you want to know your employees are going to make sure they personally do what it takes to make sure the organization always looks good. My team could have said, “Not my job” and no one would have faulted them. However, the reason that Patriots Marketing was so successful is because it wasn’t about our job description, it was about getting the job done. Whatever it takes.

Put The Contract In The Drawer And Never Look Back