Give More ~ Get More 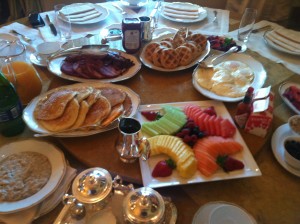 I grew up in East Boston in a three-decker dumbbell tenement building. My grandparents lived on the first floor and we lived on the third floor. We spent a lot of time on the first floor with my grandparents and ate dinner there practically every night. My grandmother was a seamstress and worked piecework in Boston, and my grandfather worked construction, tended bar, and worked at Suffolk Downs race track as a pari-mutuel teller. He juggled all of these jobs to make ends meet, and needed all three because of the seasonality of the work. What he really wanted was to own his own breakfast place and sandwich shoppe.

When I was about 9 or 10, he scraped together enough money to rent a store near the square and purchase all of the items needed to get things going. I used to walk to the store every chance I got to watch him in action. He loved making food for people and seeing them enjoy every bite. The shop wasn’t a cash cow, but he took great pride in it, and enjoyed owning his own place. One day, I noticed that a couple of firemen were there getting sandwiches and my grandfather told them it on was on the house. Another day, I saw him do the same for a couple of policemen, and then one day I saw him not charge a very popular business man in the city.

So one day, when we were alone, I asked my grandfather why he gave away sandwiches to certain people. Why didn’t he charge them? He sat down with me and said, “Louis, it’s a very small price to pay for their loyalty.” He proceeded to tell me that those folks were out in the community and people trusted them, so when they talked to folks about lunch, they will think of his store and mention it fondly. He also said that, especially with the police and firemen, if there was an emergency, they will be quick to respond, because of how nicely we treated them. Being a naïve child, I asked, “Isn’t it their job to respond quickly?” He agreed that it was, and that they probably would anyway, but by treating them nicely and with respect, the likelihood was that they would pay a little extra attention to us, and the store.

My grandfather further explained, “You see Louis, everyone thinks that if you give people what they bargained for, you have been fair and done your job. But, there is more to it than that. If you give people more than they bargained for, and the better of the deal, they will always think of you first, and they will always speak positively about your business.” My grandfather never went to college, never studied business, never got a masters, but he had a PhD in people. My grandfather’s words and actions stuck with me and his demeanor when interacting with customers strikes a chord even to this day.

When we opened TrinityOne, we threw a huge launch party for 800 people in the Castle at the Park Plaza Boston. It was quite a gala event with all of the bells and whistles. When we were planning the event, the head of security for the venue was laying out all the rules, regulations and protocols for the night, and stated that we had to hire a police detail with two officers. I immediately said to him, “Hire six.” He pushed back and said, “But you only need two.” I repeated, “Hire six; it’s a small price to pay for everything to run smoothly.” And it did. I have my grandfather’s wisdom to thank for that and many other similar instances. His words are always present: “Always give people more than they bargained for.”

Be Positive – It Will Lead You To Happiness