How The Kentucky Derby Forged An Unbreakable Bond 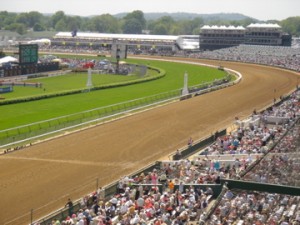 When I was a kid, my grandfather worked for Suffolk Downs in East Boston; he was an enormous thoroughbred fan, thus making me one. I went to the track often, and although Suffolk was considered by some to be the next stop prior to glue, I enjoyed being with him, placing bets and watching the races.  I remember the track’s slogan vividly, “The most action $2 could buy” – it was clever and they were correct, it was a great take.  I had called my grandfather “Bumpy” since I was a little kid. We spent quite a lot of time together; he made a tremendously positive impact on my life.

Bumpy and I always watched the Triple Crown together – The Derby, of course, being our favorite race of the three.  For you non-horseracing folks, the Triple Crown is made up of three races: the Kentucky Derby, the Preakness Stakes, and the Belmont Stakes.  It is not an easy feat to have the right combination of speed, position, jockey and luck required to win the Triple Crown.  Only 11 horses have done it in history: Sir Barton being the first in 1919, and Affirmed being the last in 1978.  My favorite horse of all time was Easy Goer.  Bumpy and I loved watching this horse race, and we both thought he had a chance for the Crown. Unfortunately, Sunday Silence made sure that was not the case. Although, in the end, it was actually Easy Goer who spoiled it for Sunday Silence by winning the final jewel of the crown at the 1989 Belmont Stakes.

Bumpy loved all horseracing, but the Derby was special and it was a dream of his to attend. I wish I had found a way for him to go to the event before leaving us, but unfortunately, he passed away before he had the opportunity.  But even after his death, the first Saturday in May remained special to me, and I was resolved to attend the Derby with the memory of Bumpy in the forefront of my thoughts.

Patricia and I did finally get an opportunity to attend the Kentucky Derby. During that first time at the Derby, all I did was think of my grandfather and how much he would have loved the event.  It was an unbelievable experience.  Patricia and I had a blast and often reminisced about Bumpy.  We had so much fun, that when a pal and business associate, Michael Lynch, asked me to participate with a small group in buying a horse, I jumped at the chance.

The horse’s name was Louie the Red (I didn’t pick the name), and he was from Unbridled’s lineage.  Unfortunately, Louie the Red didn’t utilize the genes of his grandsire and never won a race.  I have to chuckle because he never finished – Win, Place or Show. But it was fun, and we didn’t lose a ton of money.  I have to thank Michael for allowing me to participate in the consortium, and even more so for inviting me to my very first Kentucky Derby.  Thank you Michael, you are a good friend.  I have since been back to the Derby, and although it was enjoyable and fun, it could never match the emotion and enjoyment of Bumpy’s Derby.

I do hope to own a horse again, and my goal will be to name him “Bumpy’s Boy” after my grandfather.  No person, living or dead, showed me as much about enjoying others through common bonds and like interests as he did.  When we watched football and horseracing together, it was as if the rest of the world stopped and it was just the two of us discussing life and enjoying our time together.  I miss him every day. Much love Bump.

If You’re the Head of the Table, You Don’t Need to Sit There