Living With An Edge 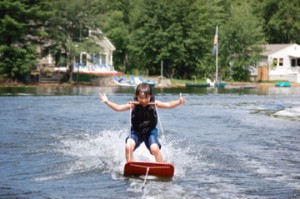 When I was a young child of about age three, my dad bought a small cottage in New Hampshire. That purchase could have been considered odd, given the fact that we lived in an apartment in East Boston, rather than our own one-family home. Hindsight being what it is, it is clear that my dad made a very smart move, which unbeknownst to anyone at the time, had a dramatic impact on my life, who I am as a person, and my outlook on life. In fact, that $10,000 purchase probably has contributed the most to my overall existence.

Growing up in East Boston in the sixties and seventies was definitely a learning experience for me; it was almost like getting a master’s degree in life. Although Eastie was my foundation, it was the small town of Amherst, New Hampshire that really molded me and helped separate me from the pack. This will sound a bit twisted, but the little New Hampshire town gave me my edge. Yeah, I know, most would think my edge would have come from Boston, and perhaps it is rooted there, but Amherst brought it out in me.

In East Boston I was just another Italian kid on the block, but in New Hampshire I was “That kid from Boston.” When I was with my buddy Steve, we were “Those guys from Boston.” It was instant teenage cred, especially back in the 70’s when Boston seemed like a 1000 miles away, and so very different from life on the lake. Compared to the rest of the guys we knew in our hometown, Steve and I were pretty mild kids, but at the lake, well… we were (and I have to giggle here) the “thugs.” I know for a fact that other kids were very tentative around us, not wanting to do or say the wrong things. It was funny; Steve and I chuckle about it to this day. The persona we had was clearly through perception, and not at all based on reality. This will not surprise anyone, but the interesting part about the whole image, is that we embraced it and perception became reality at some point in time.

I will not speak for Steve, but the “edge” we had became part of my personality, and definitely fueled my ambition and gave me my drive. The attitude I adopted made a clear difference in what I strived to accomplish. The good thing is that we knew real thugs and criminals, and we wanted no part of that lifestyle, so our edge was not truly “gangster.” However, the distinction at the lake was just enough to propel us in life and in our professional direction. It gave us a certain swagger at a pretty young age. Not that phony, overcompensating attitude that young people put on to pretend they’re cool. No, we had true swagger.

I credit my mom and grandparents for being the key components of instilling confidence in me; so much so that I have had billionaires and their kids tell me they have never met anyone more self-assured. I think I have to tip my hat to my dad for buying that first cottage; there may have been a hidden agenda to his unconventional purchase. That one move supplied me with just enough edge. That, combined with the instilled confidence, is the reason I have taken chances in life and have stretched well beyond where my talent alone would have taken me.

I can’t say whether or not you are satisfied with your life, if you’ve had the good fortune and family I have been blessed with, or if you have the drive to change things for yourself if you want to. I hope you do. But, even if you don’t have it in you to try for yourself, there is likely someone in your life who is at an early and impressionable stage and is ready for that chance for an edge. Focus on giving them what they need to propel forward in life and take calculated risks. It doesn’t have to be as grand as buying a summer home, but identify what will make the difference, and provide the opportunity. At the very least, it will be very rewarding to see how they make the most of the chance they were given, and perhaps it will be extremely rewarding when they write a blog post recognizing the impact it had on their life ~ Thanks Dad!

What do you do when you put your foot in your mouth?