Madame, this is THE Tavern on the Green… 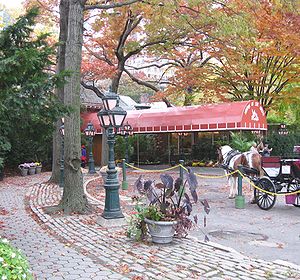 A group of us were in New York for my buddy Joey’s engagement party. We all came into the city for the weekend and there were a bunch of activities planned –  dinners, cocktail parties – all of the festivities that go along with that kind of gig. So, most of the long weekend was filled – all except Sunday. Most folks were heading back to their home bases at different times, so that day was going to be a bit more ad hoc.

Although we had been together for many years, it was the very first time my wife Patricia and I had been in NYC together. So, when we woke up on Sunday morning I said to her, “The city is yours, we’ll do whatever you want.” She got an excited look on her face and stated that she had heard that Tavern on the Green was a special place to have brunch.  Of course, I said, “no problem,” suggested we see if anyone else wanted to join us, and asked  her to buzz the restaurant to get a table for 2pm. My buddies, Steve and Ricky, were still in town, and although the thought of food was good, the two bachelors were on the fence about going to Tavern on the Green.

I told her to get ready and to tell the boys we are heading over around 1-ish.  I jumped in the shower while she rang up Steve and Ricky.  While I was getting dressed, I asked P if the boys were in. She said, “Oh, yeah – I told them the restaurant was booked solid and that you said we were heading there anyway; they weren’t in the mood, but wouldn’t miss this for the world.” The four of us jumped into a cab and headed to Tavern on Green.

When we got there, we entered the foyer where everyone was waiting to be seated. I navigated through the sea of people, with my crew of three in tow, up to the reservation desk. The maitre d’, who was all business, asked for my name. I answered, “Franklin.” He surveyed the list up and down and said, “I’m sorry sir, I do not see a Franklin on our list; could it be under another name?” While sliding him a c-note I said, “You must be missing it; table for four – Franklin, Ben Franklin.” The pretentious dude looked up at me and said, “Oh, yes Mr. Franklin, wait one moment.”  I smirked at my crew and gave them the nod – “we’re in.”

A moment later, my new best friend looked over and said, “Right this way to the Crystal Room, sir.” As we followed him, we saw four waiters carrying in a table, chairs, and the whole set up.  They plopped the table into the middle of the room, and instantly, everything was set up, and the maitre d’ told us to enjoy our brunch. Patricia, Steve and Ricky were enjoying every aspect of the scene.  We were out of place – the way Dan Ackroyd and John Belushi were in the restaurant scene in the movie, The Blues Brothers. Now, you might be saying, “Lou, sure, when you have money, it’s easy to wave it around and get what you want.” I would say two things in response:  first, it’s more a matter of attitude and owning the situation than anything else, and second, we actually had no business going to the Tavern on the Green, never mind slipping the dude $100. I worked in radio, made little money, and we had just bought our first house. But at the same time, my philosophy has always been to capture moments like that – they’re to be seized and enjoyed. After all, it was our first time in NYC together, and Patricia never asks for anything. I wasn’t going to let a little thing like a reservation bring her any disappointment. Besides, missing an opportunity like that for “practical reasons” is sure to turn into a future regret, and you just can’t let that happen if it’s within your power.

As with all things in life, there has to be balance, and you can’t just make those grand plays with total disregard for reason, because that will surely cause regret and problems as well.  But there are those times when you just have to say…. well, you know the saying…. and this was one of those occasions.  It’s a story and a memory that we are glad we secured for our lifetime of experiences together.

So – what is your Tavern on Green? And if you do not have one – what are you waiting for?

The Origins of Go Do