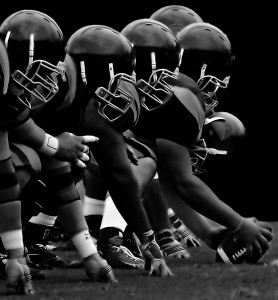 The NFL draft this past weekend got me thinking about talent and unrealized potential. Think of all the first-round draft picks over the years who were busts in the NFL. Having talent is a wonderful gift that can lead you to success, but no matter what the circumstances, attitude will carry you a lot farther toward success than talent alone. There are many gifted people out there who never met their potential, and much of that is due to their belief that talent was all that they needed. It’s a huge pitfall to think that way.

Like many, I wasn’t blessed with any God-given talent. I was a mediocre athlete, couldn’t play a musical instrument, got basically B’s in school, and had no technical ability; a pretty average kid with not a whole hell of a lot going for him in the talent department. But I was blessed to have a family that was very supportive in everything I did. I lived in the same house as my grandparents and they always instilled in me that I could do anything I put my mind to. When you are told this over and over you actually start to believe it. So, even a clumsy kid like me started to believe he was graceful and could excel at anything he tried.

It propelled me to go to B.C. High, which was probably a stretch for me. It lifted me up to believe I could be in radio and TV. It absolutely fueled me to believe I could be the CMO of an NFL franchise. My parents and grandparents made me believe I could do anything, and that attitude is powerful stuff. But the important part of their propping me up was that after they said I could do anything, they followed up with the “BUT”. But, it’s not going to just come to you. But, you are going to have to work hard. But, you will have to have the right focus and determination. A whole lot of big “Buts” in my face (sorry, couldn’t resist).

What it did was to help me overcome every doubt and fear when attempting to do anything. I knew that if you walked into a job, you had to “own it”. When you were given an assignment, you had to “own it”. When you received an opportunity, again, you had to “own it”. The positive can-do attitude was fully part of my nature and it fueled me to push myself and get things done. Now this positive attitude comes with its own pitfalls. The confidence can sometimes manifest as cocky, and the positive attitude can appear to be egomania. When I was younger, it was definitely more magnified. I’m still working on it, but I don’t think I ever meant it to be perceived as such. I was just fueling my own belief in myself and reinforcing what my family instilled.

I will say, that it absolutely made me confident enough to believe I could do many things that probably many would say were out of my reach and range, including writing a book (Winning the Customer comes out this fall from McGraw-Hill ~ shameless plug).

So my family really is responsible for anything I have ever accomplished. Their constant support and encouragement has always stuck with me. I am sorry if you didn’t experience the same support, but here is your opportunity to change things for your kids or those you mentor. Don’t focus on their talent, or lack thereof. Help them build their confidence and dismiss their fears. Let them know that they are in complete control of their success and failure. Allow them to be relentless in everything they pursue. Talent is great, but remember, the right attitude will take you a lot farther.

What do you do when you put your foot in your mouth?