Be Present No Comments

Giving Is About The Recipient, Not The Gift. 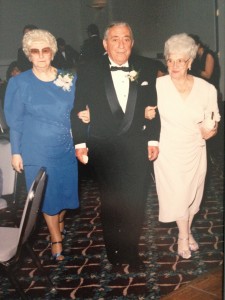 The holidays always make me think of my grandparents. There should be no surprise there, I am sure the same is true for many. The thing that stands out for me is how selfless they were for their children and grandchildren. I realize there are many wonderful grandparents making children happy each and every day, but my grandparents had a profound effect on me. They brought the notion of giving of themselves to a whole new level. They epitomized Shel Silverstein’s amazing children’s book, The Giving Tree. The more of themselves they gave to us, the happier they were.

My grandparents worked harder than most and saved their money, but not to buy themselves a “McMansion” or the hottest new car being displayed on the showroom floor. They didn’t have fancy, oversized watches or silly “bling”. Possessions in these categories meant very little to them. They were more concerned with things in the home to make it more welcoming, rather than flashier. A great set of new wooden spoons for her to cook with was a treat for my grandmother.

There are many parents and grandparents who hover over their children and grandchildren each day believing they are providing the proper message to the kids (while still missing the point) as they pick them up from school in their Range Rovers and Louboutin shoes. By no means am I judging; I drive a convertible Mercedes and check the time on my Girard Perregaux watch, which cost more than my grandparents paid for their East Boston house, which was a huge financial risk for them to purchase. The issue is not the fact that we have more than they did; it’s making sure that we don’t substitute giving high-priced items to our kids in place of truly giving of ourselves, which is what they need much more than any possession.

I have been guilty in the past of not properly explaining to my kids that many of the advantages they have are not common, and they should also not be valued above what truly matters. When my daughter was in second grade, we received a call from her very concerned teacher about a “fabricated” story she told the class during an activity called “news time” when the kids talked about something that happened in their lives. It was my daughter’s turn, and she told a whopper. The teacher phoned to say my daughter had told a tall tale when she should have been talking about a real life story. Of course, we too became concerned, and asked her what our daughter had said.

The teacher started to recant the story, “V said you went to the Celtics game on Friday night, and that she and her brother were on the court ‘high-fiving’ the players. Then, they went up to the seats and watched the game, and at the end of half time they were able to go into the Celtics’ locker room and she was able to take a player’s jersey from his locker.” The teacher went on to retell the whole story, concluding by stating, “And to make maters worse, she told all the kids that after the game she got to shoot baskets on the parquet… Mr. Imbriano, news time is not about fictitious stories, so you can understand my concern.”

I was rendered speechless for an extended length of time.  On the other end of the phone I heard, “Mr. Imbriano?” I said to my daughter’s teacher, “I’m sorry; it’s not V’s fault, it’s mine.” The teacher was a little confused, and then I hit her with it, “Everything she told you and the kids is 100% true; all those events happened Friday night.” The teacher felt awful for having scolded my daughter for fabricating the story, and I got slapped with a dose of reality as well:  I wasn’t doing a proper job of explaining what is out of the norm and helping to keep her feet on the ground. My grandparents would have definitely provided clarity with anything I received that was “over the top” and how to put it in perspective.

It’s not a bad thing to have wonderful opportunities or cool things to play with. As parents and grandparents, we have to make sure kids understand the distinction between what really matters and what is simply window dressing. We have to make sure our giving is more about the kids and less about the gift. I recently heard the head of the kids’ school, Dr. Mary Halpin Carter, speak about the importance of grandparents in a child’s life. She included the following quote by developmental psychologist, Urie Bronfenbrenner:

“In order to develop normally, a child requires progressively more complex joint activity with one or more adults who have an irrational emotional relationship with the child. Somebody’s got to be crazy about that kid. That’s number one. First, last and always.”

As soon as I heard that quote, I instantly understood that was exactly what my grandparents had consistently done for me. It wasn’t about their needs or possessions. It wasn’t about the gifts they gave me. It was always about being irrationally in love with me and doing everything they could to give of themselves to me. Let’s continue to give more to our kids than our parents and grandparents could provide to us, but let’s emulate my grandparents in making sure we are giving more of ourselves than anything else.

Chats with Mimi at 3am

Being A Parent Is A Balancing Act