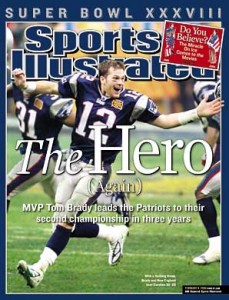 It’s Super Bowl Sunday, and all week I have been sharing with you various stories about my work experiences surrounding the Super Bowl. I think I have shown that working for a team, and especially at the Super Bowl, is not all fun and games, but there’s a reason why we do it, why we love this industry in the first place.  Our passion for the sports industry is rewarded with the fact that it is fun and games. The Super Bowl and the NFL are unbelievably exciting; they provide great enjoyment and an unmatched level of entertainment for many, and I am no exception. I have worked in the sports industry for close to 25 years and there’s a reason well beyond money that this is the case; there are moments that just make up great memories of your life, and it was a thrill to be involved. I look back and I know I selected the right career path, because it afforded me many opportunities and experiences that most could only dream of.

So today, on Super Bowl Sunday, I would like to share with you my favorite Super Bowl moments. Some are unbelievable, some are simple, but their sum total makes for magical memories.  Unfortunately, I have to leave out a bunch, otherwise the post will go on for quite some time, but I will attempt to capture a nice assortment to give you a true feel of how fortunate I believe I am to have experienced what I have with Super Bowl Sunday.

Here are my magical Super Bowl moments (not in any particular order):

1)   The night before Super Bowl XXXVI, a group of us from the team went to Harrah’s Casino after dinner to unwind for a little bit prior to heading off to bed.  As you would imagine, the excitement for the next day was off the charts.  Jonathan Kraft and I were playing craps, and I was on a streak of great throws.  We started playing hard ten, and I don’t know why, but I looked at the dice and said “Be good to us, Willie” (Willie McGinest was number 55 at the time for the Patriots) and then I yelled out, “Let’s GO Willie McGinest!” and rolled the dice.  Bam! I rolled two fives, and we made the hard ten for a sweet payoff.  The table went nuts, and Jonathan, seeing it as an omen, collected his winnings, leaned over to me and said (and I’m paraphrasing), “I’m taking that as a great sign for tomorrow; I’m going back to the hotel, don’t stay up too late,” and he left.  It was a great sign, but there were many all week.  No one with the team knew we were going to win, but there was just an omnipresent feeling that we were going to be victorious; there were a bunch of small things, like that roll of the dice, that built on that unbelievable feeling.  Michael Holley, a writer who happened to be following the team that year, was at the casino that night and included that moment in his book, Patriot Reign.

2)   It was the Super Bowl prior to my joining the team, while I was working with Sports Radio WEEI. I had transitioned from programming, and was now running marketing for the station.  The Patriots, under Bill Parcells, made a run in the playoffs and were headed to face Green Bay in the Super Bowl in New Orleans. We had spent close to a month working on promoting the station and associating our brand with the team (even though we were not the official station of the Patriots). We were responsible for bringing the whole “Jambalaya” campaign to life, and made sure that everyone in New England thought of WEEI when they thought of the Patriots going to the Super Bowl.  Eddie Andleman, the station’s afternoon host, coined the phrase “Jambalaya” as an indication that the Patriots were going to the Big Game, because actually saying that they were going could’ve jinxed the team, and we couldn’t have that.  Anyway, it was an amazing initiative that caught on like wildfire. It was “sticky” and “contagious” and, trust me, if you lived in the Boston area at that time, you knew about or were saying “Jambalaya”.  I probably could write multiple posts on this topic alone, but let me get to my moment.  So, we went down to New Orleans with our whole Jambalaya Crusade.

One night, a group of us went to the Sports Illustrated party and were hanging out having a fun time.  One of the guys in our group was former Patriot Offensive Lineman and Hall of Famer, John Hannah (who is a very funny guy).  The party wrapped up, and a few of us decided to head out to Bourbon Street to continue the party. We got down to the beginning of the street, and the crowds were huge.  There were so many people you couldn’t move – it was complete gridlock.  John, who is a huge dude, looked back at us and said, “Get behind me,” and proceeded to walk and block for us as we went down the street.  He just simply walked forward and people got out of his way, creating a hole to get us down Bourbon Street and into the clear.  I couldn’t believe it, John Hannah was blocking for me!  I turned to my wife, Patricia, as it was happening and said, “Do you know what’s happening here? A Hall of Fame Offensive Lineman is blocking for us!” To me, it was the coolest thing, because as a kid, I used to watch this guy protect quarterbacks and open up gaping holes for running backs, and now, even though we were not on the gridiron, he was doing it for us.  The best part was that I could see the pure enjoyment on his face.  I realize it’s nothing like being on the field, but for one second I caught a glimpse of how much he loved playing football.  I could just see it in his face.  This is a great memory of mine, even beyond Super Bowl.

3)   Here’s another one from Super Bowl XXXVI.  Patricia and I were at the game, watching from the 50-yard line, with most of the executive team and the directors who worked for me.  For the group to be able to stop and enjoy the game was very special. Patricia is still in awe of kickoff off when all the cameras were going off in the stadium, causing this cool flashing effect and just bringing goose bumps to a new level.  I have to admit, it was quite awesome.  There was a group of fans next to us having a fun time, consuming ample amounts of liquids.  At one point, the Patriots started driving down the field, and one of the fans said he had to go to the bathroom, but couldn’t leave before seeing the Patriots take it in for a score, which they did. Once they scored, and there was hope that we could win the game, his buddies told him he couldn’t leave his seat because it would jinx the momentum the Pats had going.  This poor dude suffered through the rest of the game as everyone else got on the bandwagon and didn’t allow him to leave his seat.  It was quite comical, but the dude held on till victory.  Not my moment, but thought I would include it because once the “W” was in hand he darted, as did I, but I was running down to the field.  I grabbed one of our sponsors, Bob Reynolds (Bob, at the time, was Vice Chairman of Fidelity and the guy we did the deal with for the Fidelity Investments Clubhouse), and we ran down the tunnels, high fiving the whole way on to the field.  We got into the team area right next to the stage, and there was pure jubilance right there on that small spot on the field.  The commissioner presented the trophy, the owners spoke, as did the coach and the MVP, and then cannons of red, white and blue confetti blasted into the air.  It was surreal; the feeling at that moment was pure joy, and to have it framed up with red, white and blue specks floating around us as if we were in a snow globe, with 9/11 fresh in our thoughts and Patriotism in full force, was incredible.  Watching the expressions on everyone’s faces was extremely satisfying.  It’s impossible to describe the feeling accurately, but trust me, it was overwhelming.  It was a true magical moment.

I have so many more memories that I could share, but will stop here for now. Perhaps in another future post I can continue these “Super” moments that are not caught on video or on any DVD compilations, but recorded to my Super Bowl memory bank. These special times made all the blood, sweat, and tears sweet moments in my life, and remind me of how much fun the wild ride truly has been.

An Interview With Lou Imbriano