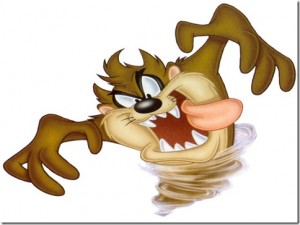 There are many pretenders out there – folks who lack the character or discipline to follow through on what they say they are going to do. At times we get caught up in their flair and flamboyance, which becomes a smoke screen that hides what they are truly about. I like to refer to this as the Tasmanian Devil Effect. You know, the cartoon character that appears in Looney Tunes segments (Bugs Bunny being the top dog, um… rabbit). I refer to it this way because Taz spins so fast, creating a tornado-like cloud of dust that shimmers and catches your attention as he whizzes by, but when he stops and the dust settles, you realize it’s just a myopic creature with selfish intentions.

I admit, I have been duped a few times by folks who appear to have substance and honor, only to learn as time goes by and the dust settles that it’s all a facade to mask their hidden agenda or inadequacies. So don’t beat yourself up for falling into the trap, it happens to the best of us. Instead, learn from the experience in two ways: First, note the traits of the pretenders, and second, make damn sure you are not one of them.

Not being a poser is easy; do what you say you are going to do. That’s pretty much it. If you tell someone you are going to do something, then make sure you do it at all costs (time, effort and money). Your word is your bond and should be more valuable and enforceable than any legal document. Of course, there are ways to rationalize and wiggle your way out of your commitments. And you can even get support from others to back up your excuses. But the fact of the matter is that the only one you are fooling is yourself. Don’t. You want to be able to get up in the morning, look in the mirror and like what you see. Don’t succumb to the crowd’s mentality. Hold yourself to a higher standard and treat “honor” as it should be, and not what others try to morph it into. Do what you say you are going to do. Period.

For some, it is not easy to identify a Tasmanian Devil, and you could get sucked into their vortex; here are a few tips to help you recognize the pretenders among us.

These are just eight of the many indications you are experiencing the Tasmanian Devil Effect. None of these alone mean anything, but if you start noticing a few strung together, then it may be time to put that relationship at arm’s length.  You do not want to invest too much of yourself before the dust settles and it’s too late.

Believe In You And Success Will Come True

Do You Really Need An Office?